Minister of National Education Mahmut Özer attended the ceremony held on the occasion of sending the first export truck as a part of the School-Industry Cooperation Model.
﻿ 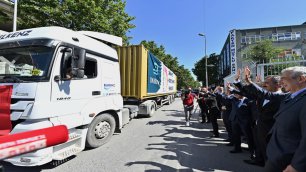 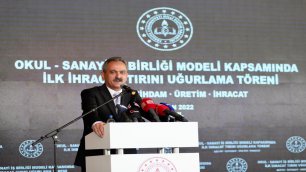 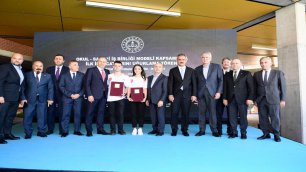 Making a speech during the ceremony held at the Küçükçekmece Dr. Oktay Duran Vocational and Technical Anatolia High School, Minister Özer said that there are two crucially important criteria in the development of a country and they are human resources capacity and production capacity.
"If you fail to increase the quality of human resources and synchronize it with the production then it will not be possible for you to compete with other countries. Based on this idea, the Ministry of National Education raises and increases the quality of human resources of our country who will also build the future Türkiye and also works in an effort to teach them important knowledge about production, innovation and entrepreneurship culture. In this light, vocational education has crucial importance," stated Özer.
Mentioning about past problems concerning vocational education, Minister Özer said, "We are not thinking about the past now. Now, academically successful students started to enroll in vocational high schools. We focus on increasing the production capacity of these schools. In 2021, vocational high schools earned 1 billion and 162 million income. Three years ago, their income was around 200,000 liras."
In 2021, students received 50 million liras and teachers received 112 million liras from profit share
Özer stated that students are learning while producing in vocational education institutions adding that, "In 2021, students received 50 million liras and teachers received 112 million liras from profit share. I believe that vocational education institutions will earn more than 2 billion in 2022."
He noted that the production capacity of these schools gradually increases and vocational education institutes are producing different products varying from electrical devices to biomedical products.
A first for vocational high schools: Export
"There are nice stories in vocational education; problems are now a history. We are looking to the future. It is the result of our cooperation with the İstanbul Chambers of Commerce and Industry," said Minister Özer.
Özer stated that the Ministry has founded 55 R&D centers at the vocational high schools and all vocational high schools in İstanbul are under the auspices of İstanbul Chamber of Commerce and Chamber of Industry.
"As a result of our efforts, we have commercialized the registered 74 patents, useful models, brands and designs" said Özer.

As a part of his visit to France where he attended the Transforming Education Pre Summit, the Minister of National Education Mahmut Özer [...]

Addressing his counterparts during the Education Ministers Round Table Session held as a part of the Transforming Education Pre summit in [...]

As a part of his contacts in Paris where he attended the Transforming Education Pre-Summit, Minister of National Education Mahmut Özer, [...]

MINISTER ÖZER IS IN PARIS FOR THE TRANSFORMING EDUCATION PRE SUMMIT

Minister Mahmut Özer held his first meeting with OECD General Secretary Mathias Cormann as a part of his program in Paris where he will [...]

MONE © - All Rights Reserved. Services are provided within the framework of the rules set forth in the Privacy, Use and Copyright notice.